There is no doubt that hot tubs and spas have that relaxing effect on the body. People go to the spa with the intention of relieving themselves from the stresses of everyday life. While a lot of people may know about what the spa can do to a person’s well-being, there are also a number of people who don’t. Thus, here are a few features, advantages and benefits of hot tub spas that you may not have known before.

There are several features you would want to look for in hot tub spas. These features do not only contribute to the aesthetic effect of the spa, but also on its overall performance as well. When considering the tub’s appearance, check out its understructure and shell. Make sure that there are no cracks or leaks on the entire surface of the tub. There should also be no bubbles, or any flaw in general to these hot tub spas. Good ones have a high UV resistance level. There are also tubs that are equipped with testing systems for temperature fluctuations. This particular feature will be especially useful if you are located in a place that has extreme climates. There are also those that have understructures which are made from fiberglass or solid foam. These kind of materials provide very good insulation and support.

Another feature that hot tubs and spas have is cabinetry.  Hot tubs that are not “in-ground” usually have a cabinet that you can use to store your spa products in. Aside from storage purposes, the cabinet also has aesthetic purposes as it contributes to the overall look of the hot tub spas. The cabinet is usually made of wood, or something that is wood-like (for instance, synthetic wood) in appearance or property. A good hot tub cabinet should be easy to remove in order for it to be easily serviced.

All hot tubs and spas are equipped with a heater for warming (or heating) the water to a desired temperature. Good hot tubs have heaters that are wrapped around water pipes, instead of being actually exposed to water. If the tub’s heater is powerful, the faster it will be for the water to be heated. Usually however, tubs with powerful heaters will also consume more energy as compared to other tubs that have less powerful heaters. 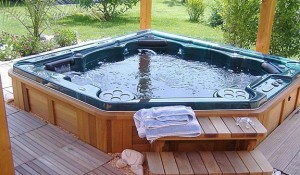 Almost all hot tubs and spas also have filters and pumps. There are tubs that use filters that are of the cartridge-type. This kind of filter will need to be hosed-off at least once a month. An important tip in choosing a good spa is to consider where the filter and pump are located. These two parts should be placed in such a way that both are easily accessible, so that there would be less hassle in the event that both parts need to be checked or repaired.

Advantages and Benefits of Hot Tubs and Spas

Perhaps hot tub spas are most known for the hydrotherapy benefit it provides to the body. Hydrotherapy, or water (warm) massage, is one of the most effective ways to relax the body and de-stress the mind. With the combination of buoyancy, massage, and heat, the body is subjected to a healthy and relaxing experience. When done regularly, hydrotherapy from hot tubs and spas can provide the body with health benefits and not just temporary relaxation.

Water, despite it being simple and pure, can cure muscle and joint pains through hydrotherapy. It can even cure sleeping deficiencies and headaches caused by tension and stress. This is because hot water in the tub helps blood vessels in the body expand  or dilate, allowing blood to pass freely and thus relieving the headache. This is also true for muscle or joint pains, as hydrotherapy helps increase blood circulation in the body by dilating the vessels. When blood flows freely inside the body, nutrients also flow freely, helping to repair any tissue that might have been damaged.

Bathing in hot water in a spa before going to bed also makes it easier to transition to a more deep sleep. Hydrotherapy can also alleviate arthritic pain, which is why most doctors recommend hot tubs and spas for patients with arthritis. It has also been suggested that hydrotherapy helps to control diabetes. A study conducted in Colorado found that there was a drop of 13% in the glucose level of those people who indulged in hot tubs and spas for 30 minutes at least six days in a week. With this, it was concluded in the study that soaking in hot tubs and spas lowers both the body’s glucose level and blood pressure.

Other benefits that are said to be brought by hydrotherapy from hot tubs and spas include relief from Multiple Sclerosis, depression, Cerebral Palsy, and Carpal Tunnel Syndrome. Generally, studies on hydrotherapy have suggested that being immersed in hot water (combined with a massaging effect) will help significantly in the relaxation of the body and in the overall health of the person. This is why it is recommended to indulge yourself in hot tubs and spas regularly, or even every once in a while.