Nowadays, more and more manufacturers are focusing on creating different varieties of portable spas or portable hot tubs. The invention of these movable hot tubs in recent years has made it possible for a lot of homeowners to install a spa in their homes. People have also been given more options for a home spa aside from the in-ground kind. With a portable spa, more and more people will not need to go to the gym or hotel or a public spa just to get their relaxing hydrotherapy, as they can just enjoy it in the comfort of their homes or wherever they may be.

What’s So Good About A Portable Spa? 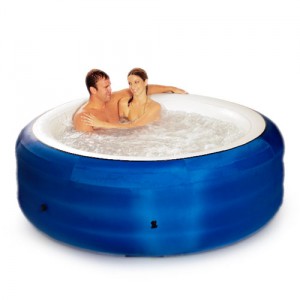 Perhaps the biggest advantage of a portable spa is the fact that it can be moved from one place to the another, as long as it is placed on a flat surface. In the past, most spas or hot tubs are entrenched in the ground and so would require tedious labor during installation. It would even be more laborious to uninstall, which is why it is better to leave it like it is, embedded to the ground. If in case you will need to relocate, you will not be able to bring the hot tub with you. This will not be the case for a portable spa. Because there is no need to implant the tub to the ground,  moving it from one place to the next will require less manual labor. Although moving the spa can be really heavy, at least you will not have to destroy the flooring of that part of the house just to relocate the hot tub.

Basically, there are two types of portable spas. There are those that are solidly-built and then there are those that are inflatable. The first types of hot tubs, being solidly-built and having a fixed structure, cannot be disassembled or broken down to pieces. However, because this kind of a hot tub is not embedded into the ground and is instead placed on a flat surface, it can be relocated from one place to another. The second type of portable spas, being inflatable, can easily be deflated and disassembled. Once deflated, folded and placed inside its box, this inflatable portable hot tub will then be relatively light to handle, and will also take up less space as compared to that of a solid portable spa.

When it comes to variety, most inflatable spas have a capacity of two to four people while the solid ones can accommodate more than that. There are solid portable hot tubs or spas that can accommodate as many as seven people. Solid, portable spas also have more added features, like cabinets, multi-colored lights, water jets, waterfalls, and even a TV or DVD system. Both solid and inflatable spas are created in several shapes, aside from the conventional rectangular one.

How Much Should One Expect For A Portable pa?

How To Choose The Best Portable Spa

If you have already decided to buy a portable spa, the next thing to do would be to do some research. Look up several companies that manufacture home spas and learn about the different brands and models that these manufacturers offer. Most manufacturers already have websites that display all of their products and services so it would not be very difficult to obtain the necessary information. While looking these things up, you can also include a pricelist for these portable spas, then compare which one appeals most to you, both in price and features. You can also read some feedback given by customers about particular models and brands of hot tubs. Doing your research thoroughly will help you gain more than enough information about what things need to be considered when it comes to a portable spa. Armed with your new knowledge, it will then be easier for you to ascertain what you want for your own home spa. Once you have picked a specific brand and model, you can then proceed to ordering that portable spa for your home.